Well I survived to tell the tale and am now sitting on comfy cushions instead of saggy ones. The covers aren't perfect but they make getting up and down so much easier for my legs so it was a worthwhile exercise. 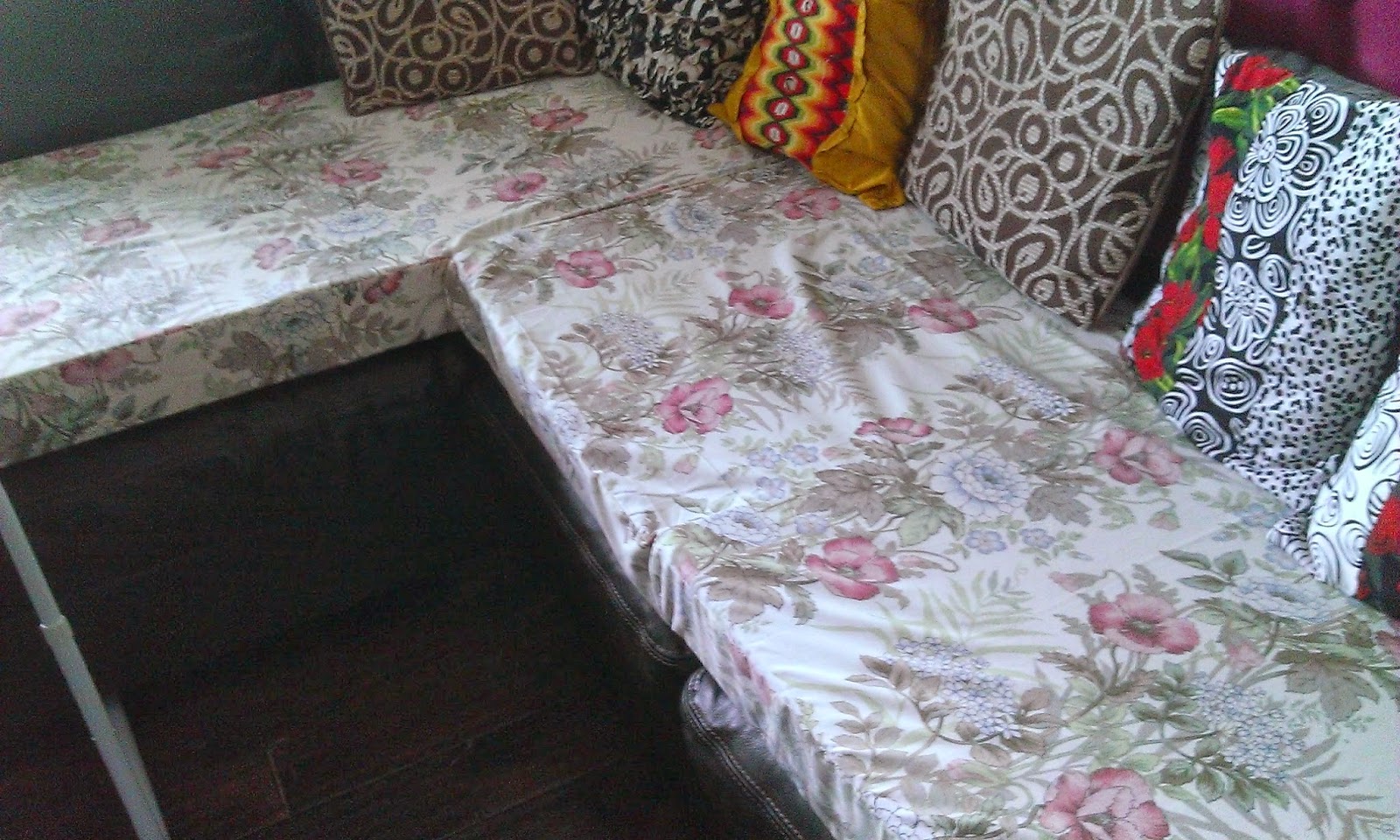 Anyone planning a bit of al fresco dining this summer. Just heard that the forecasters are saying we are going to have one of the hottest summers ever - yeh right! but we can hope. Just in case they are right, these place mats will be the ideal thing. Nice summer colours and a natty little pocket to stop your napkin blowing away. 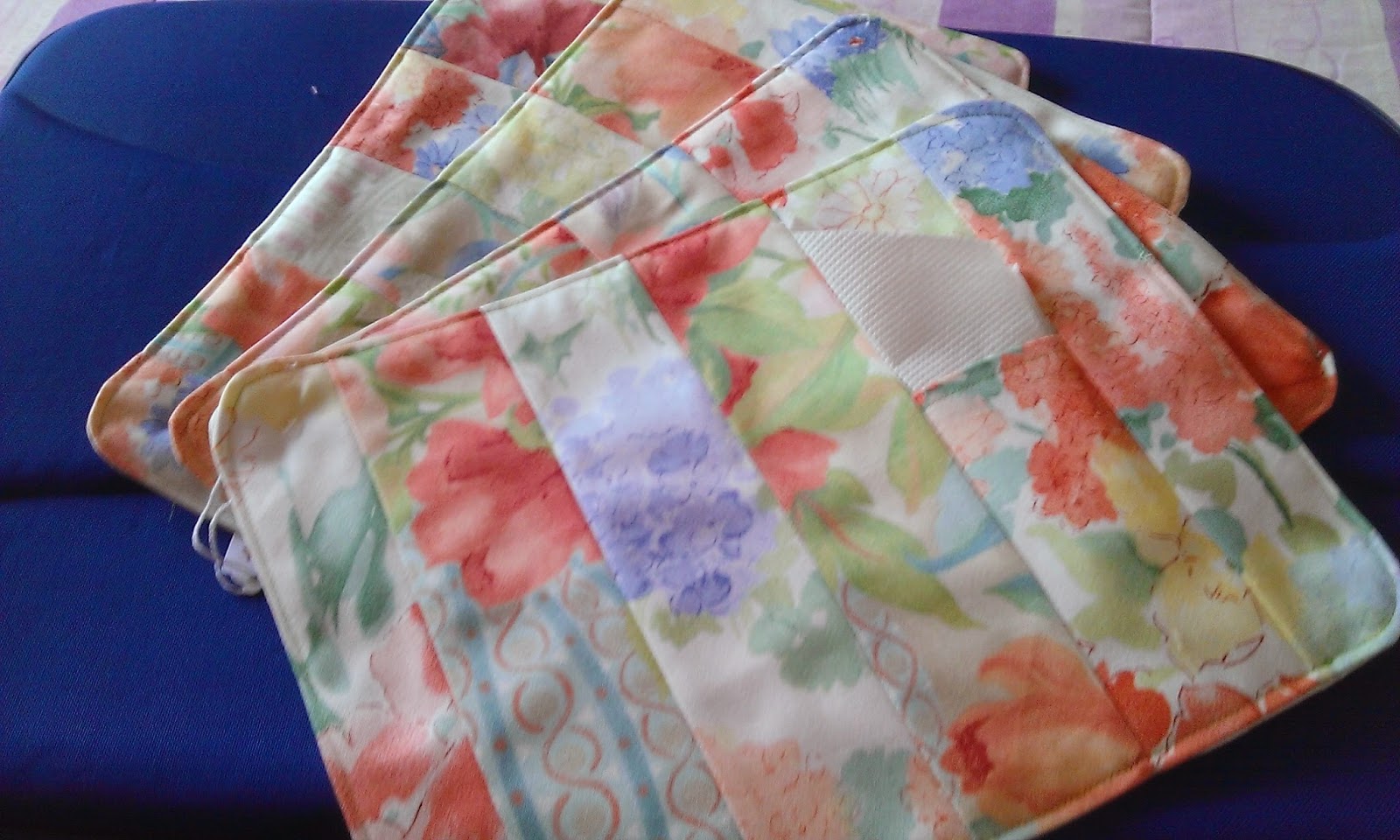 Well Creative Crewe are attending the Virgin pop-up shops on Crewe Railway Station for the next 4 days so come along and support us and find a present for Mothers Day. I had mine this morning, the most beautiful bouquet of roses from my son Thomas. Made me cry they are so lovely. 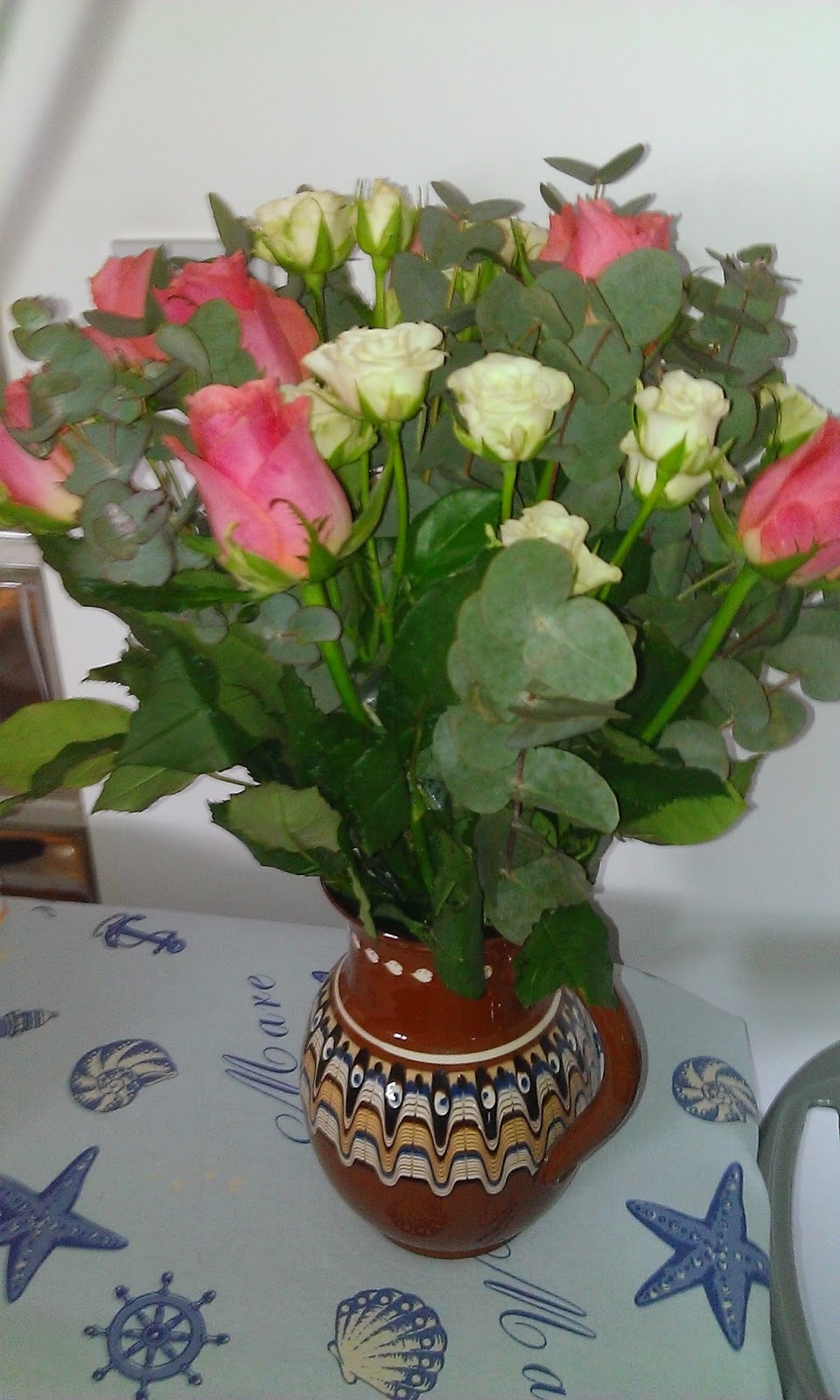 Bye for now
Posted by Unknown at 5:11 AM No comments:

Well more like afternoon tea time than dawn but that didn't seem to sound right.

Thought I would have a break from the heavy backpacks and try something more with summer in mind. So I have come up with a few little summer inspired hand bags, gone all flowery which is worrying as anyone who knows me should know I'm anything but flowery.

The top one is a cheat on patchwork as the material is printed squares giving a patchwork affect. 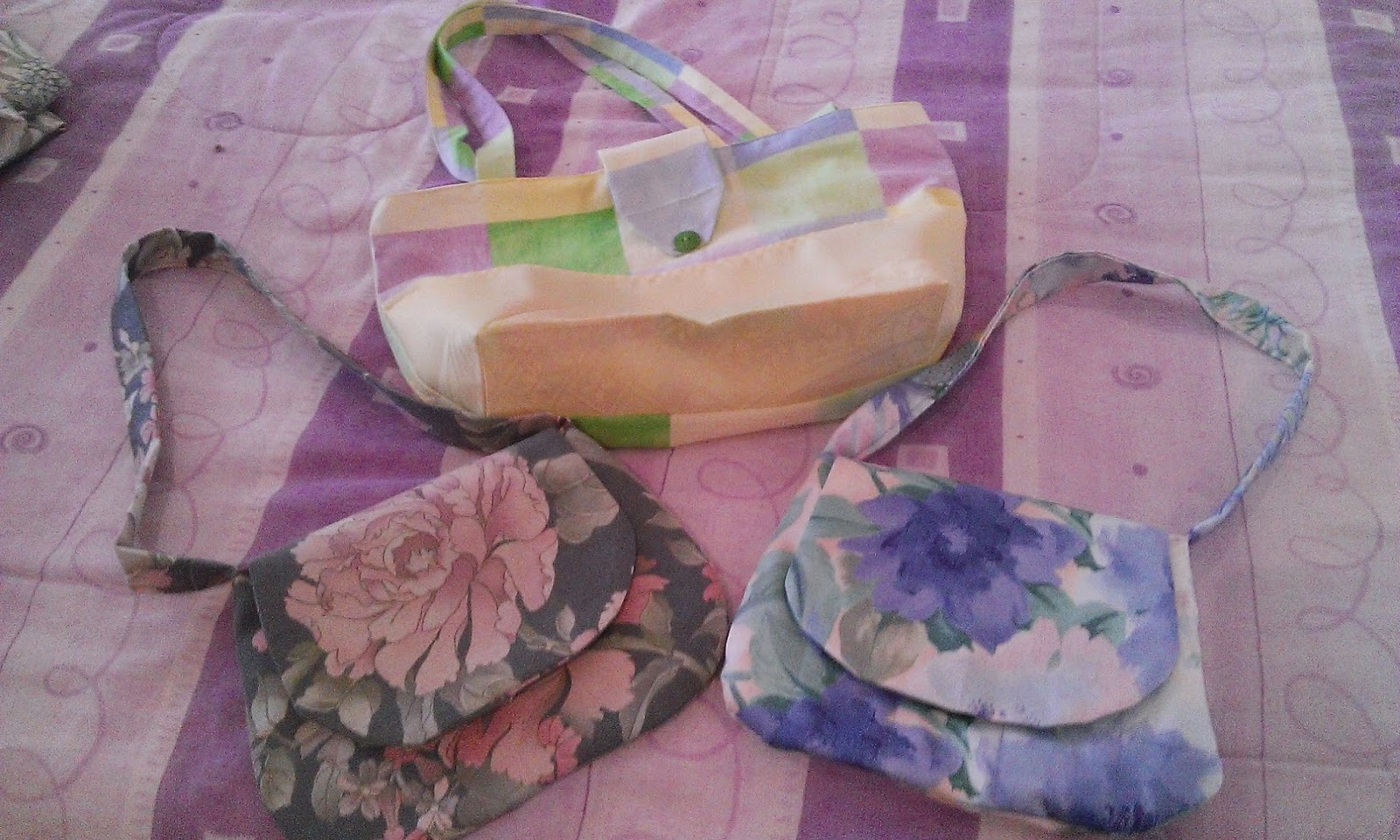 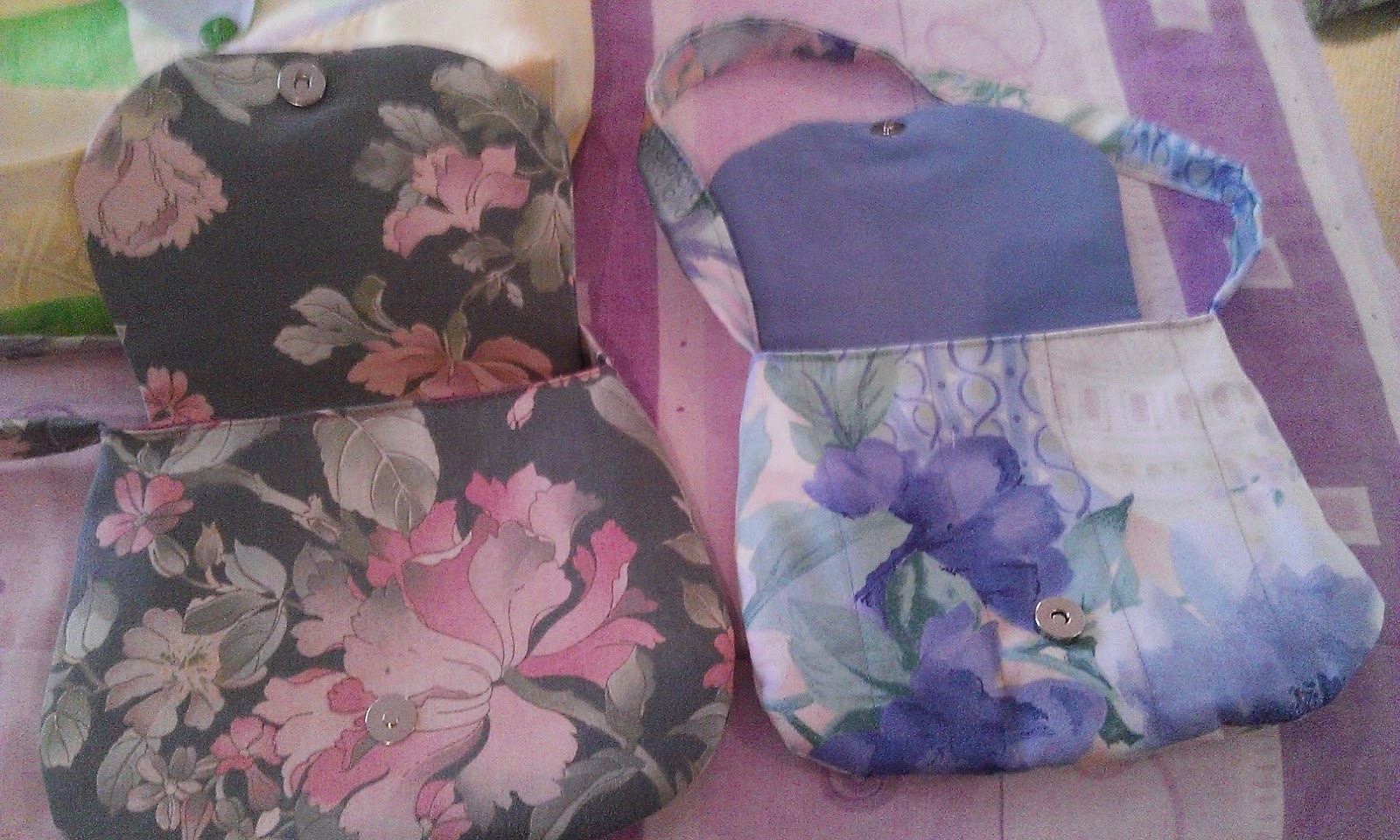 They are lined and have a magnetic catch and a short shoulder strap. All we need now is the summer......﻿
I may be sometime before my next posting. I have just bought foam cushions to raise the height on my sofa and now have to make covers. I have some lovely curtains to use but never having done anything that has to fit precisely, this could be a slow process. I'll leave  you with the before picture and fingers crossed will be able to post a successful after picture sometime in the not too distant future. 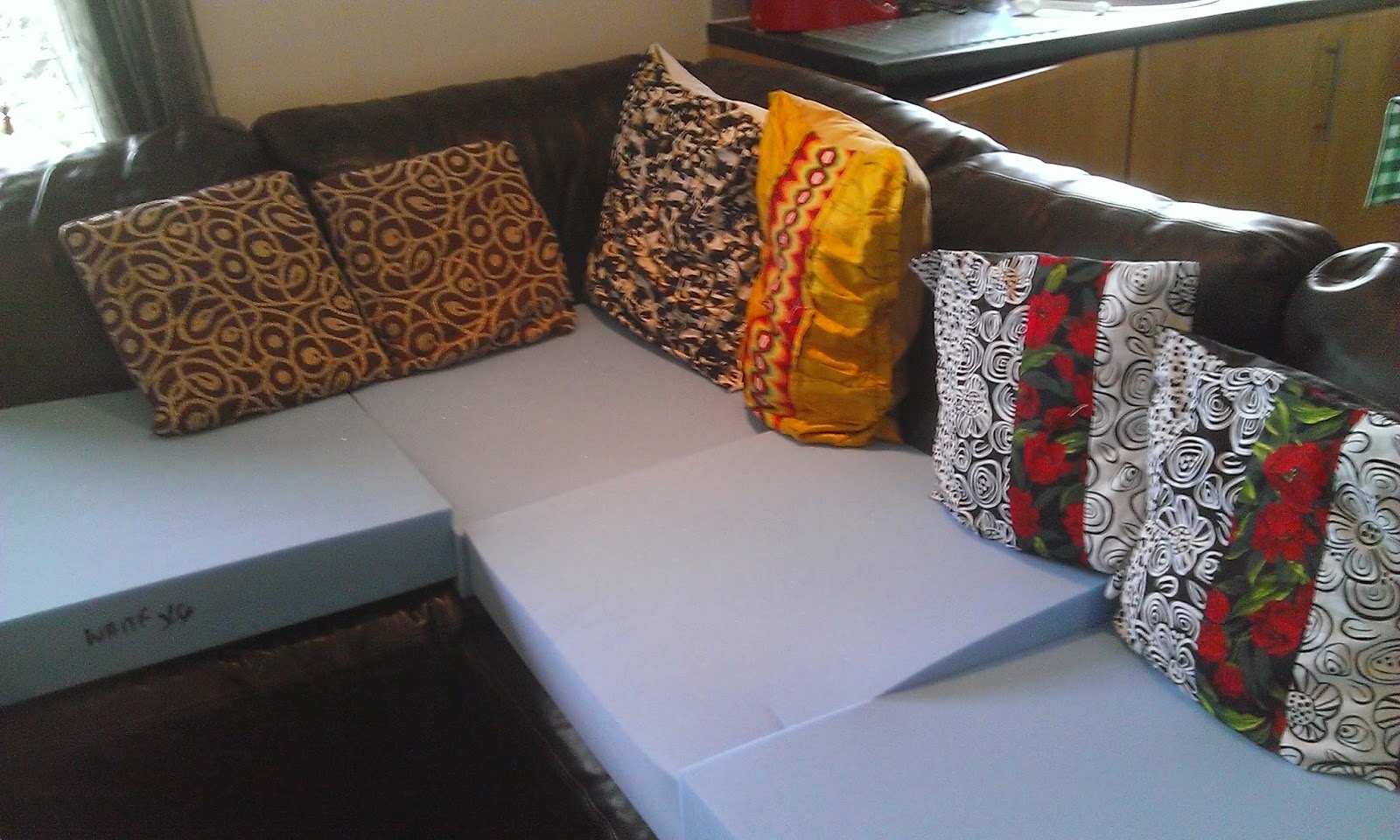 Posted by Unknown at 8:06 AM No comments:

Take some old denim, an outgrown little girls dress, a shoelace and a sewing machine and what do you get? 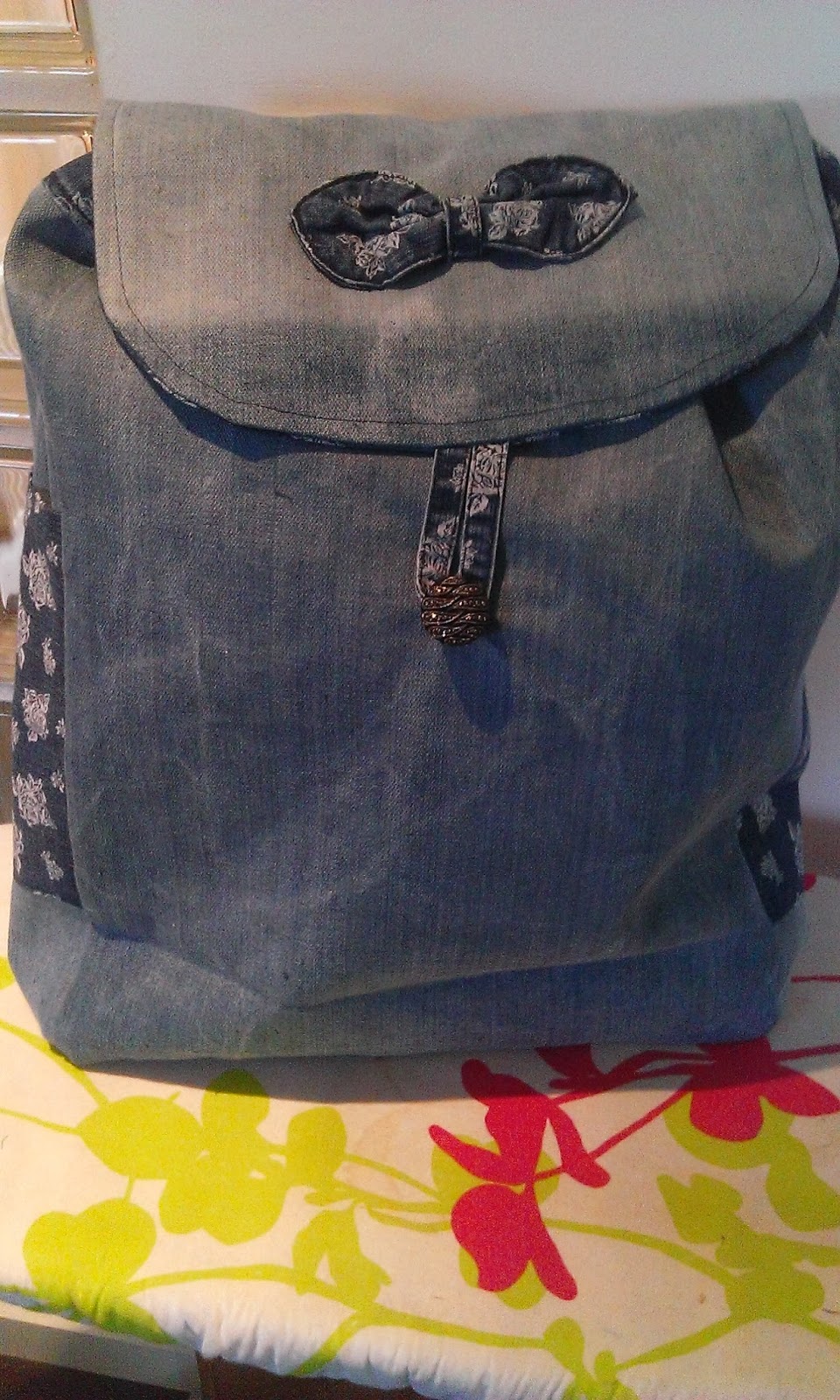 I think this is the favourite one I have made to date. I love it and it looks great. the photos don't do it justice . 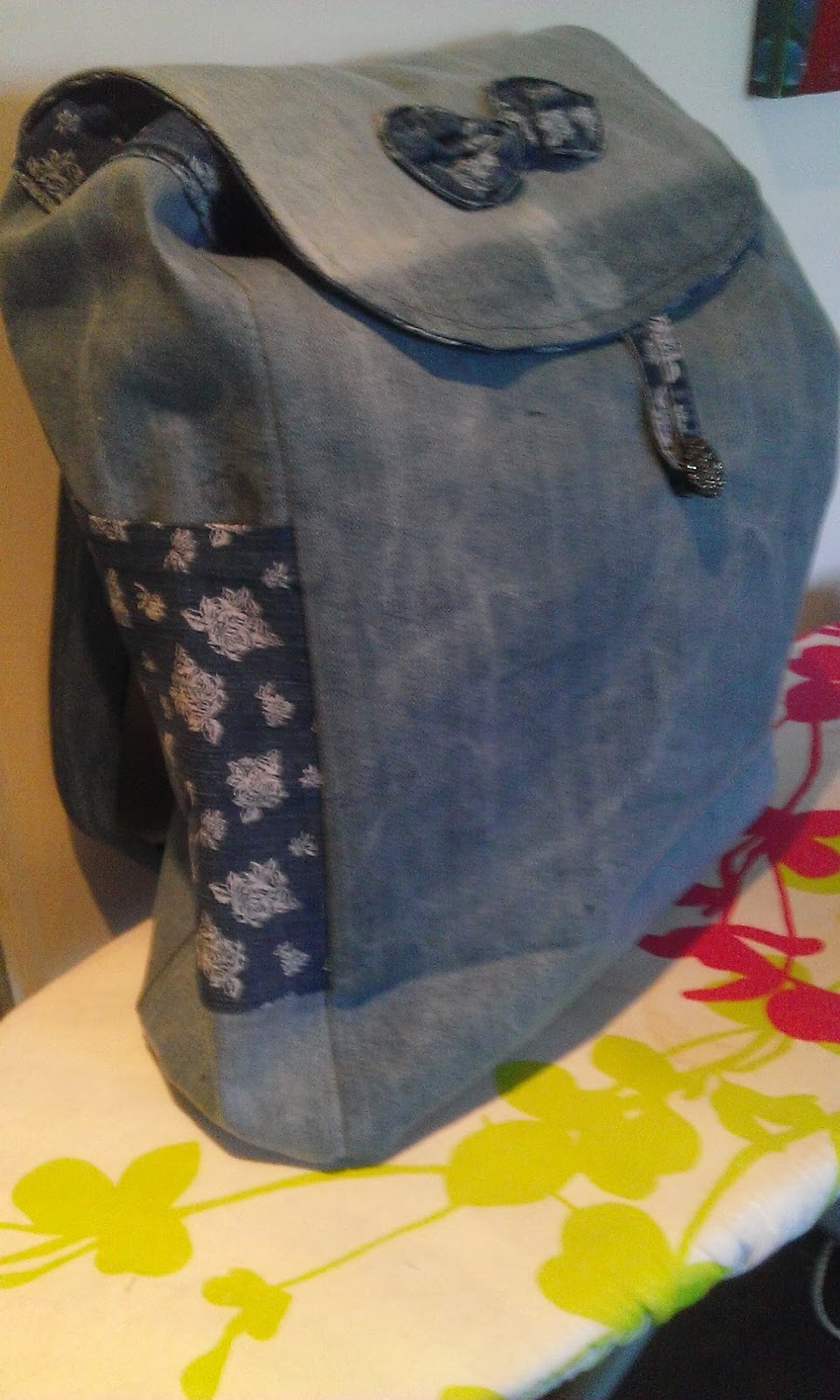 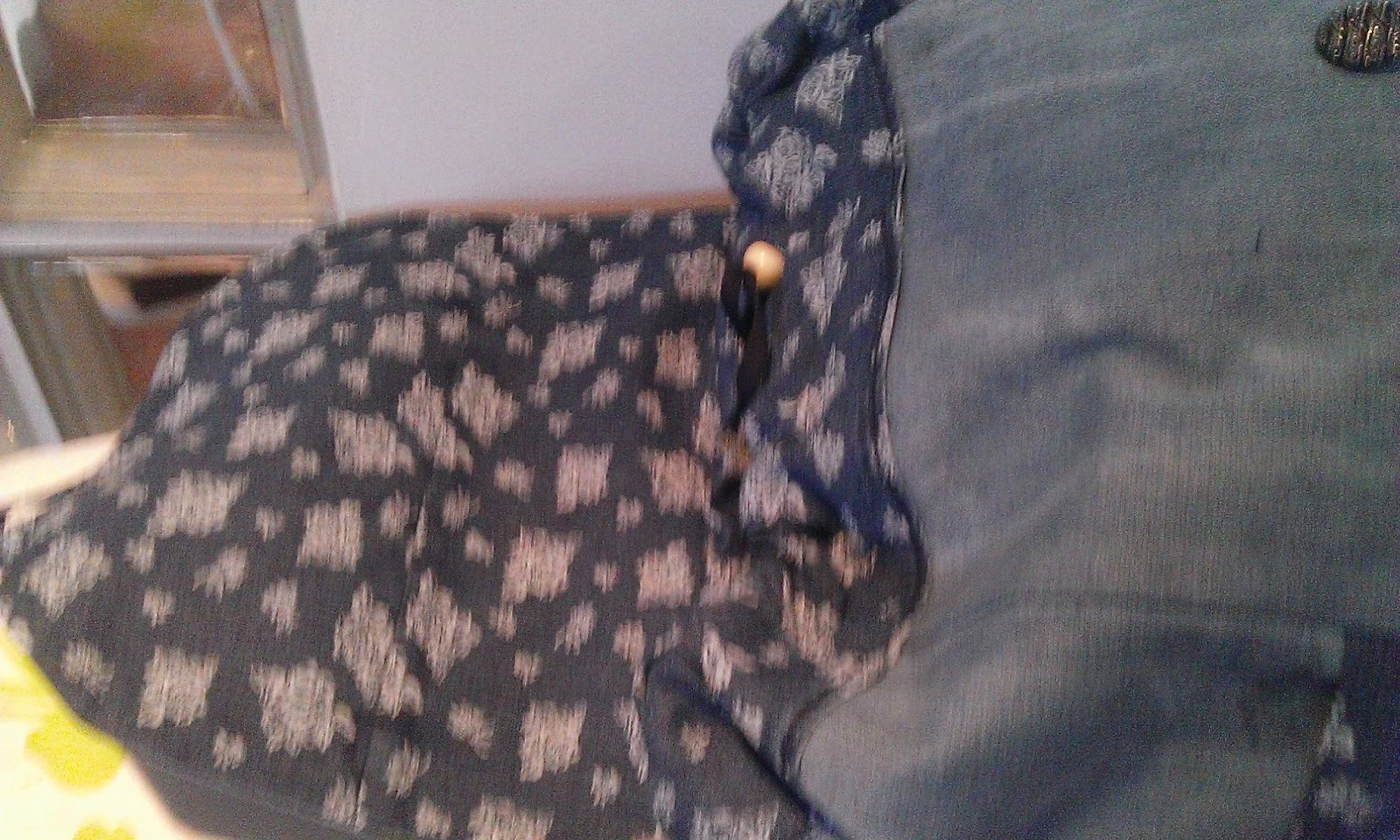 The denim was a piece that I obtained that had been used as a table covering, it was nicely faded in places giving it a lovely look. The little girls dress just complimented it so much. Oh and the shoelace is the drawstring just in case you wondered.

Haven't been  making much recently. One reason being I have been working on a large quilt as a wedding present for a friend's son so that has curtailed my other sewing.

That project is now finished and I will post pictures but not until after the wedding just in case- don't want to spoil the surprise.

I did make a couple of ipad pillows and a patchwork waistcoat last week so I guess I haven't been too lazy. 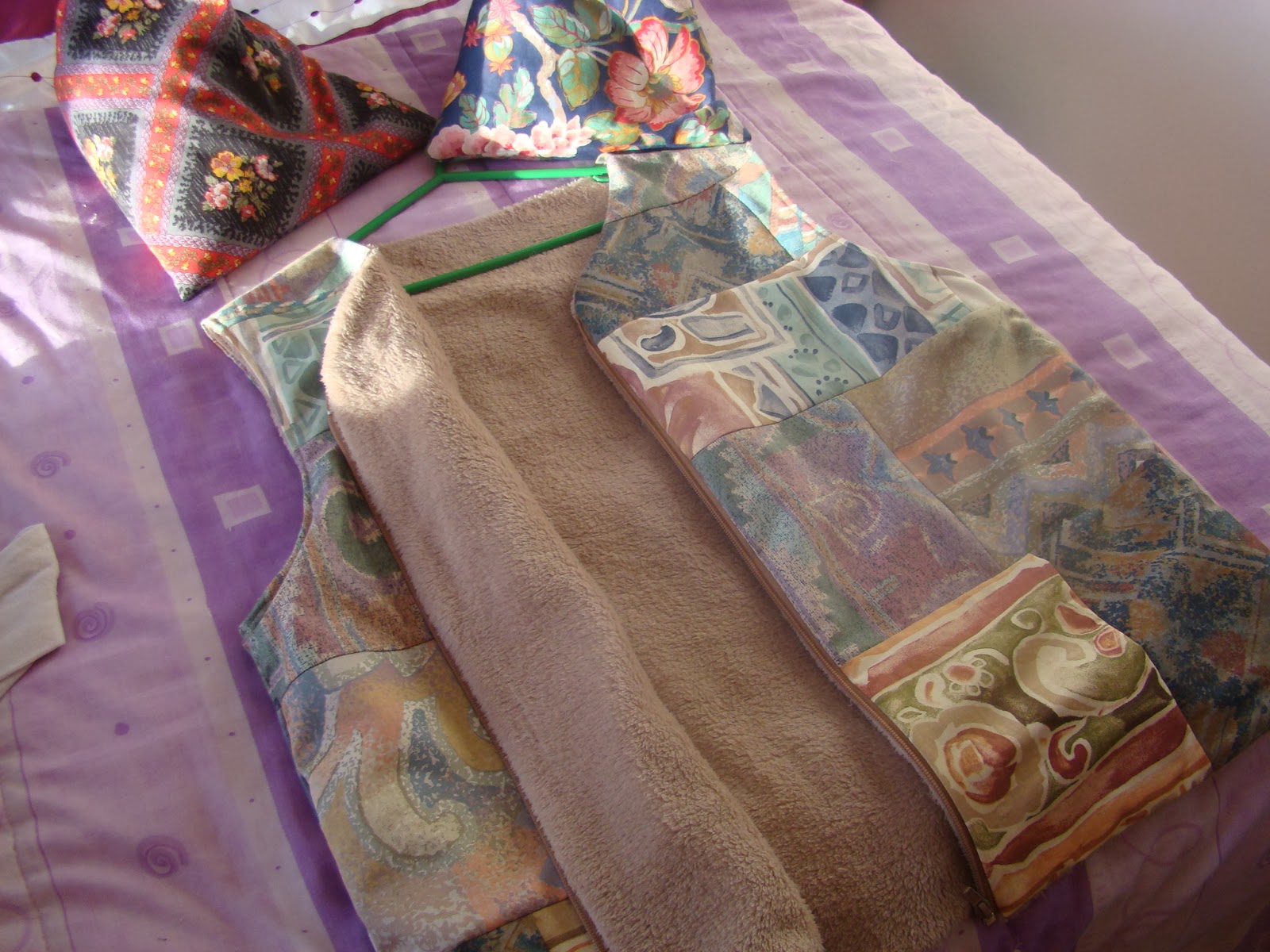 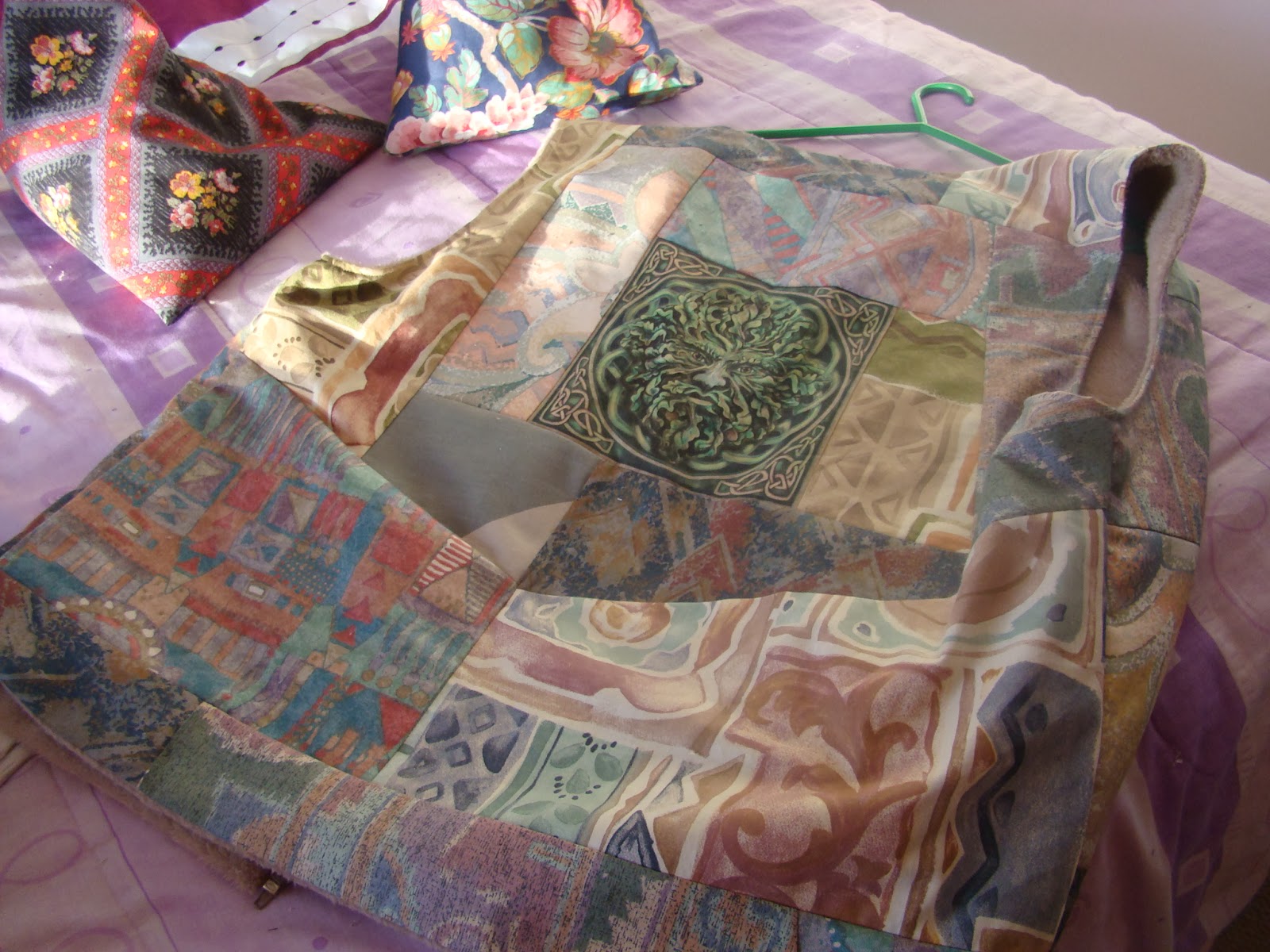 So it is now back to building up some selling stock. Creative Crewe have a stall at the upcoming Virgin Media event on Crewe Station (March 28-31) and I have very little left so need to get sewing.

I have finished my first bag today so that's a start. The nice thing is this is all recycled materials, I think the only new material is the thread and the toggles on the drawstring - even the drawstring is a recycled shoe lace! 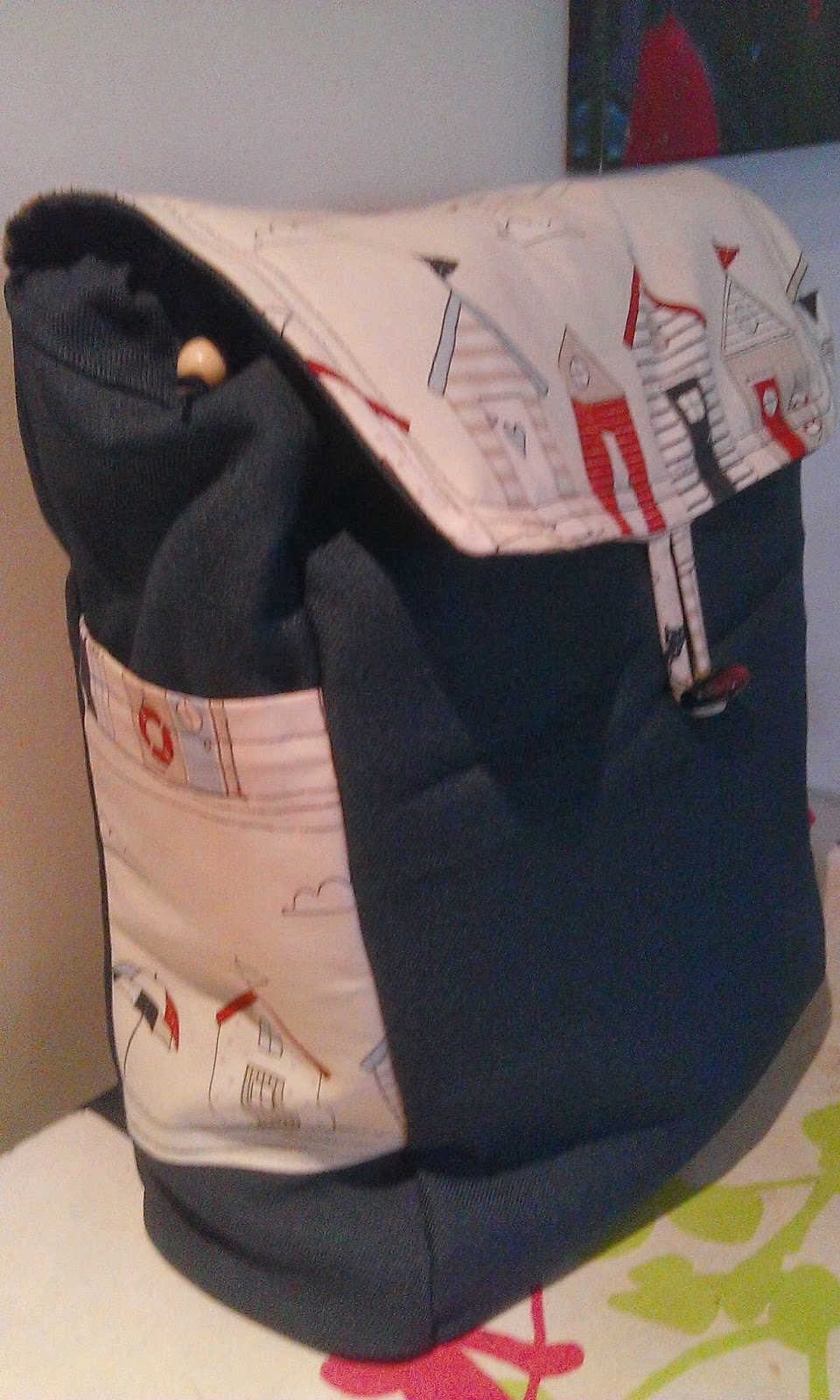 Well that's one done probably need a few more for the sale so will post pictures when I can.﻿
Posted by Unknown at 9:19 AM No comments:

Going soft, well the toys are!!

Hi everyone, haven't blogged for a while - don't know where time goes these days. Considering I don't work I still seem to fill my days and never do half of what I plan. I have been working on a big project, a memory quilt for a wedding present which is taking some of my sewing time so there hasn't been a great deal of output to show. The quilt will take a while longer but I will post it on here once finished

In the meantime I have just spent a few hours making a birthday present for a little one year old. He's the grandson of a farming friend and I was inspired by some lovely fat quarters I was given at Christmas which had farm animals and tractors on them. I remember the soft books that used to be about when I was little (I dare say they still are but haven't ventured into a toy shop for years).

So I used the pictures to make a little picture book, one little hands can hold but not rip. 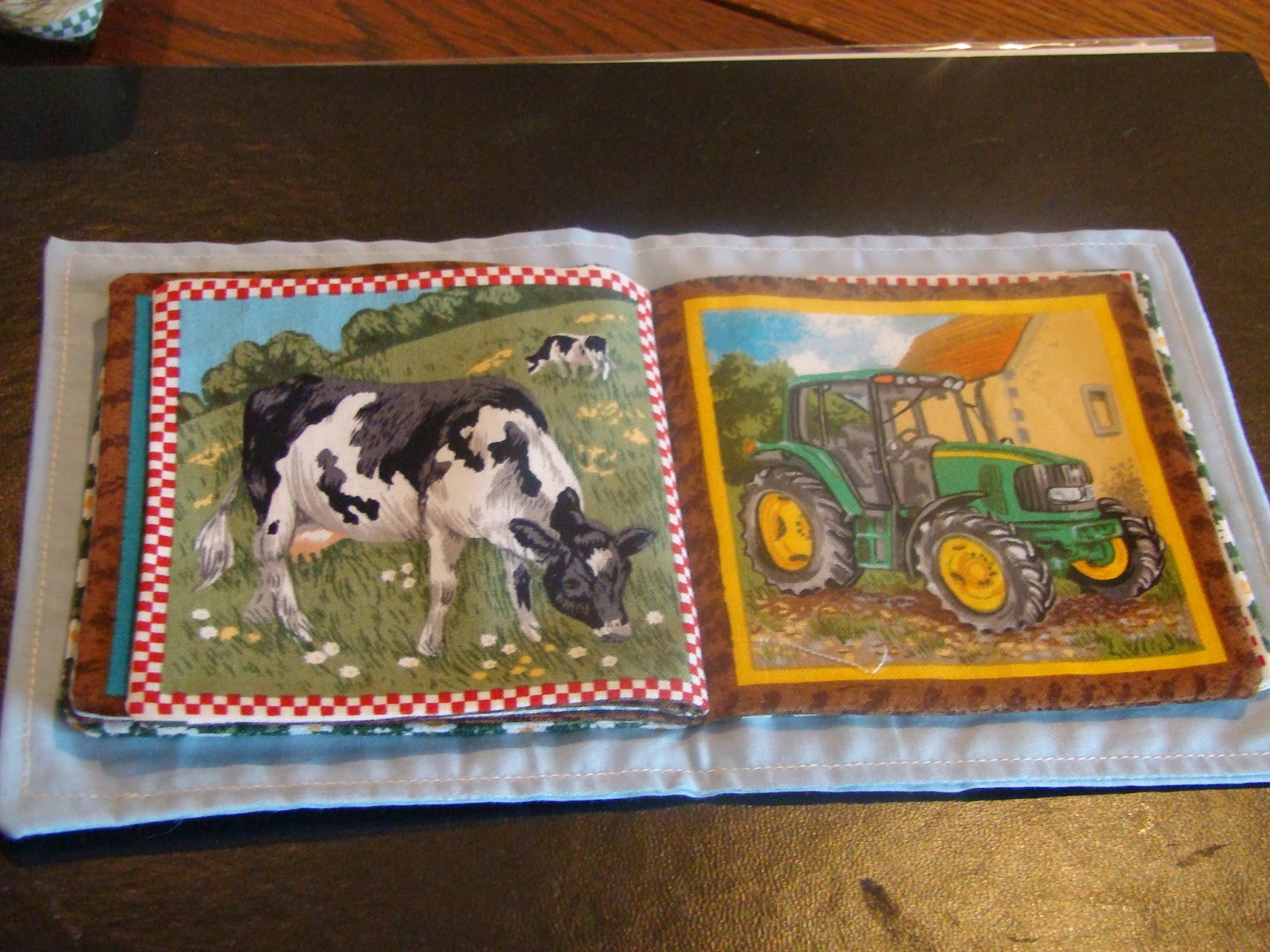 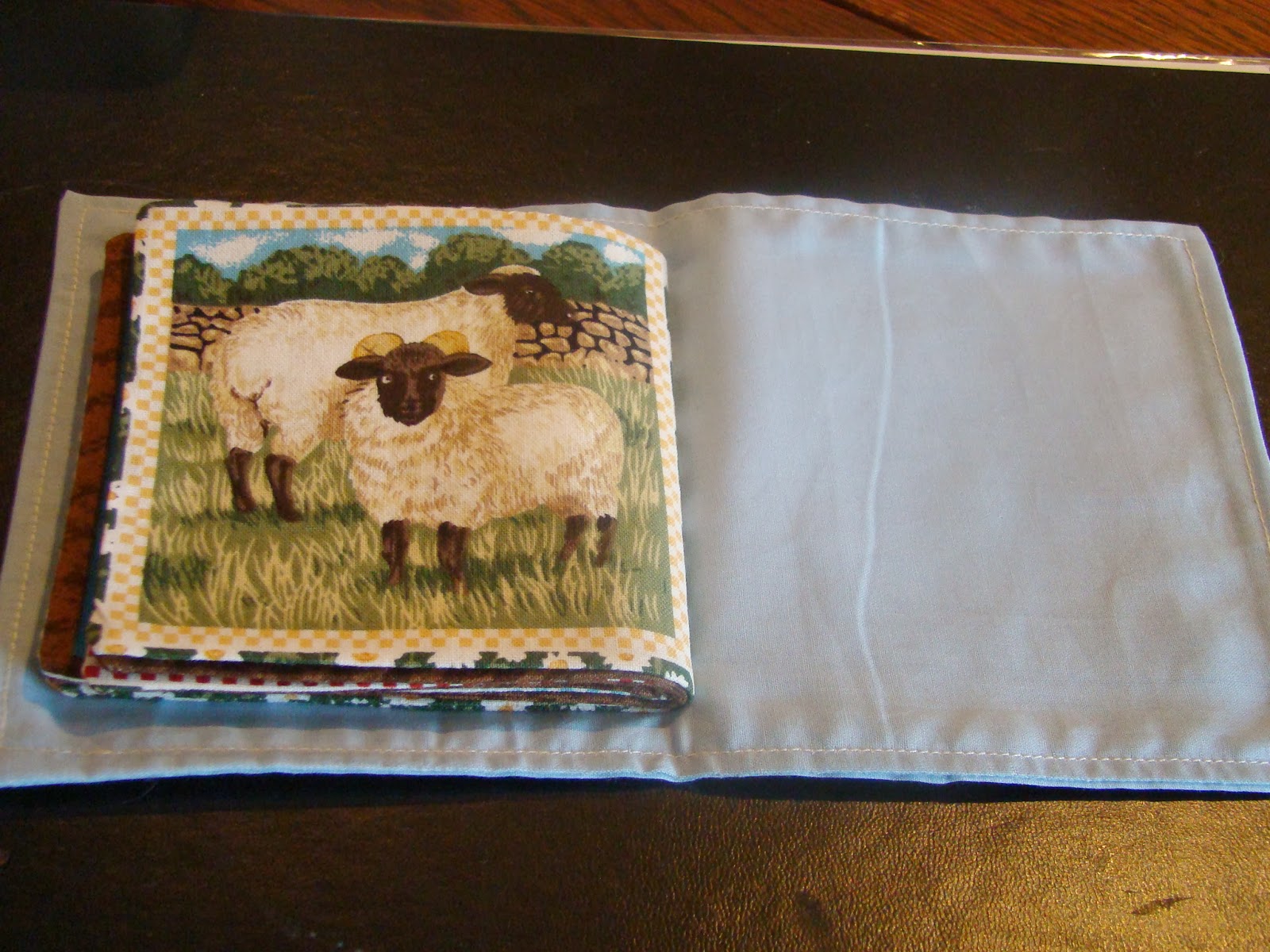 I was then left with 6 little squares that I didn't know what to do with - lightbulb moment - 6 squares make a cube. So the remaining pictures became a soft block filled with off cuts of wadding that I always keep for stuffing. He can look at the pictures or throw it at someone if he wants, there are no sharp corners!!! 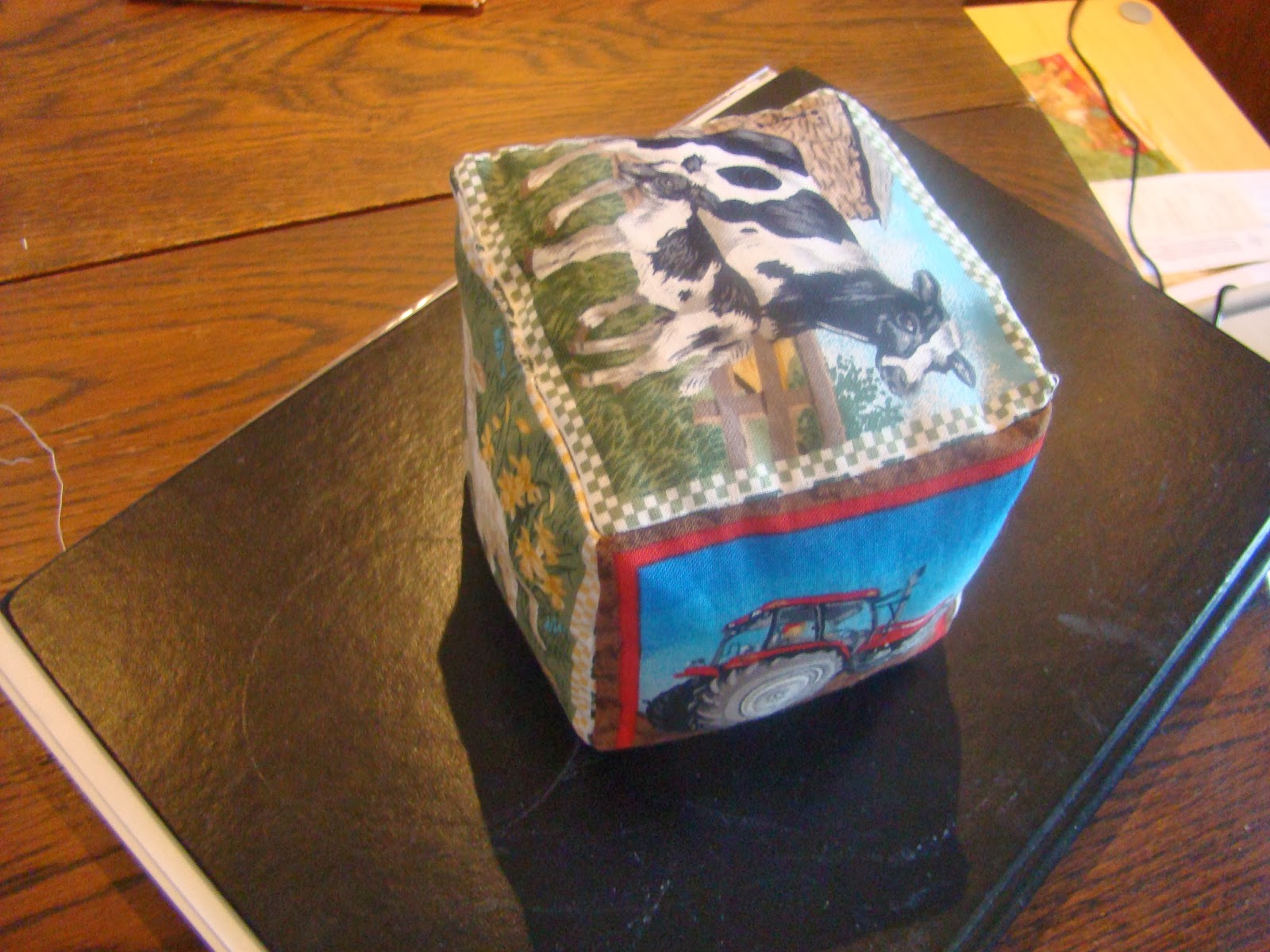 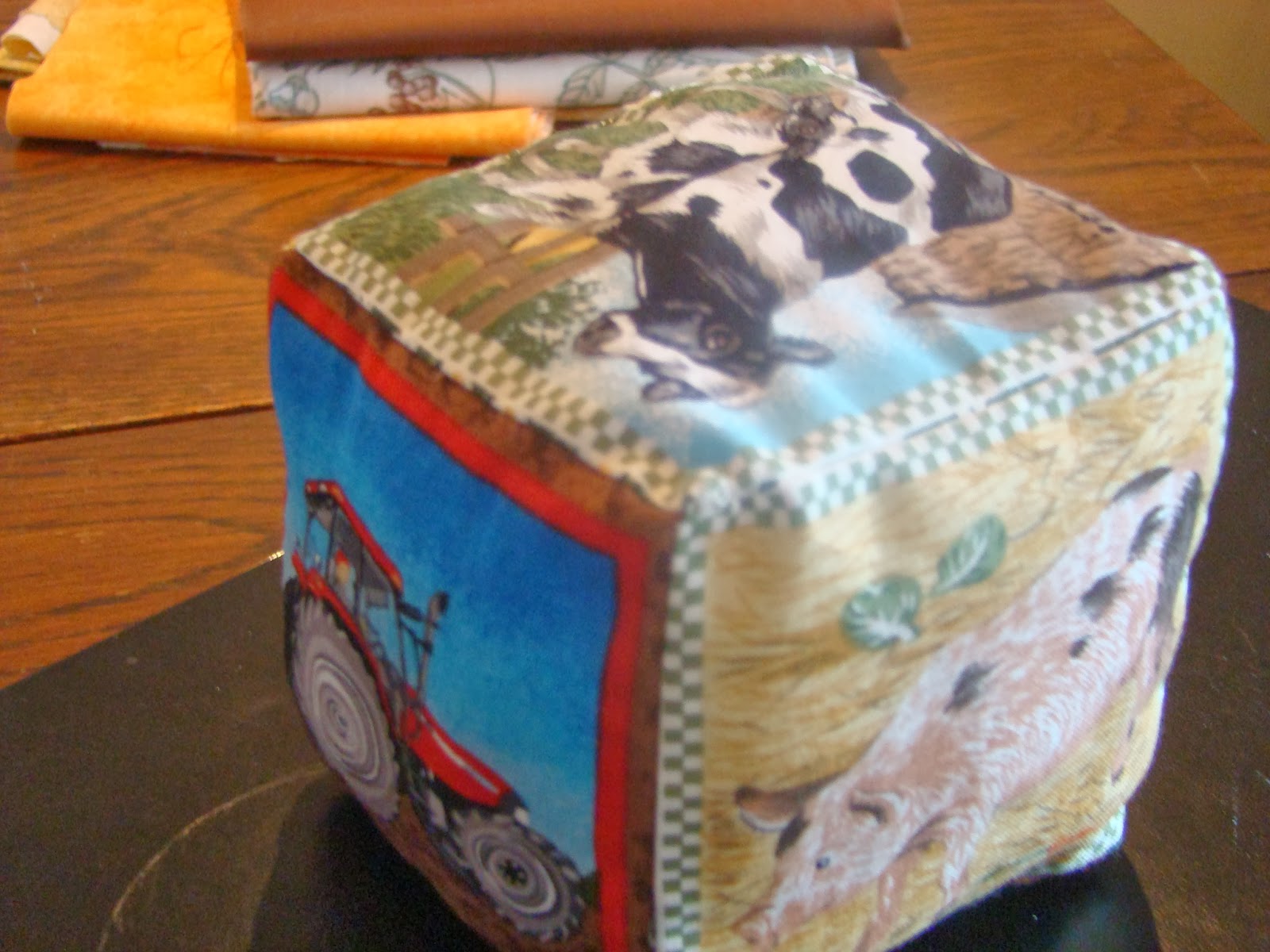 Well  I guess that's it for now, back to the quilt before I lose my inspiration.﻿
﻿
Posted by Unknown at 7:09 AM No comments:

My home made Xmas Tree

I only have a small one bedroomed flat so don't really have the room for a traditional Christmas Tree and looking around the shops I was uninspired by the small artificial trees on offer. I saw a long time ago a Christmas Wreath made from oddments of material and thought why not make my own tree! I had lots of scraps of green based materials which on their own were not really viable for projects but together would make some sort of project. 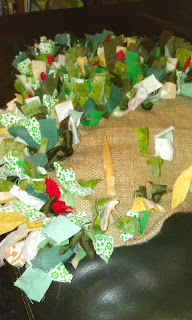 This is done by poking holes in the hessian with a prodder, mine was the traditional half peg, sharpened to a point. The scraps are cut into strips and poked through the holes with the peg.
It took a while but it was a handy thing to keep me occupied whilst watching TV at night.
Finally the whole of the hessian was covered. 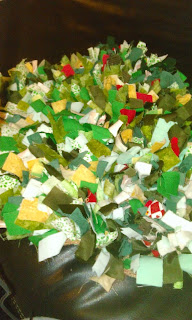 I included a few bits of red and gold coloured scrap material to give the effect of berries or baubles. I then stitched the edges together to make the cone shape and put some old cardboard inside to help it hold it's shape and added a cheap star decoration on the top to finish it.
Hey presto....my own artificial tree that will hopefully last for many years.... 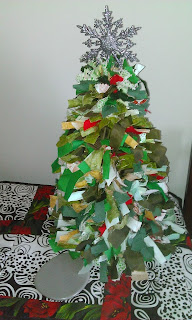 Just a quick posting to show one of my makes that has proved quite popular recently. I have made - and sold!!! - a number of these but never took any pictures. This is one I have made today (to order). Most of the others I had made previously were, not on purpose, more suited to ladies as the materials tended to be floral so while at a fayre over the weekend I was asked if I had any in more manly colours.

The idea of these is to drape them over the arm of your sofa or armchair to keep your remote controls, spectacles or other such items to hand. 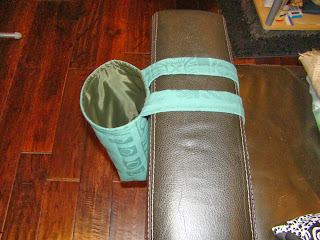 The opening of the bag is kept open by a ring of plastic boning sewn in between the outer and the lining. 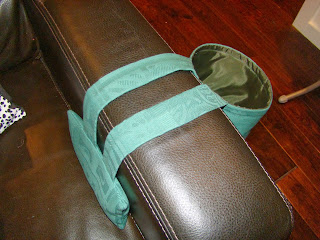 ﻿
﻿
To balance the weight of the items placed in the bag the other end of the connecting straps has a small bag filled with dried rice.

Another use for these is as a small bin for scraps when crafting. The weight can be put on the table with the bag hanging over the side and all your scraps or off cuts can be put in the bag instead of (if you are anything like me) all over the floor. 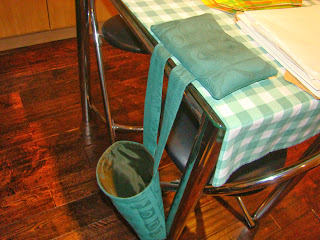 Well off to find some more manly material to make a couple more of these handy items....
Posted by Unknown at 11:04 AM No comments: